Donkey Kong 3 – Another classic Game & Watch title gets a BASIC conversion for the ZX Spectrum!

Another day and another Game and Watch mention, as the previous one was called ‘Octopus’ which was ported over to multiple Amstrad systems, and this latest release called ‘Donkey Kong 3’ has been released for the ZX Spectrum and developed using BASIC. Now unlike the other game port developed by a team of homebrew fans, Donkey Kong 3 however is a Game & Watch game for either one or two players, released as part of the Micro VS. System series on August 20, 1984 and converted over by je7ebel!

Here is what the Wikipedia page says about the game “In Game A, the player controls Stanley, who has to battle the computer-controlled Donkey Kong. Stanley and Donkey Kong are at opposite sides of the screen, each holding a spray of insecticide. They must each use his can to push bees towards his opponent. After a bee successfully reaches one side of the screen, the character on that side will get stung. The player earns a point every time their cloud of insecticide sends a bee toward Donkey Kong’s side. The player earns 10 points if a bee reaches Donkey Kong’s side. 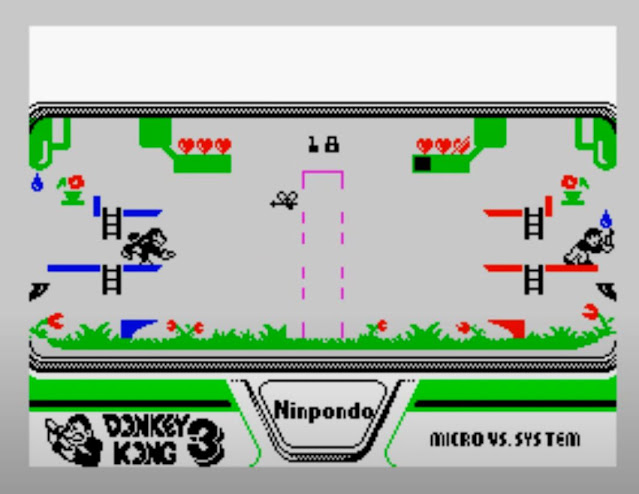 However, the objective is not as simple as firing insecticide towards the player’s opponent. The bees move up and down the screen, forcing the player to do the same if to succeed. Also, each of the two characters has a limited supply of insecticide, which can be refilled; however, the player’s back is turned while the player is refilling, rendering them defenseless. The player gets a miss if a bee reaches their side. When the player gets three misses, they receive a Game Over“.