Donkey Kong ’94: The Handheld Masterpiece You Might Have Missed

When you hear “Donkey Kong”, I’m sure a few games spring to mind. The original arcade game that spawned the platformer genre and Mario’s first appearance, perhaps? Maybe the SNES Country games? It would be quite surprising if the first game out of a Nintendo fan’s mouth was a Donkey Kong Game Boy game, but it’s about time that changed.

Donkey Kong for Game Boy was released in 1994, so most folks call it Donkey Kong ‘94 to differentiate it from the arcade original. At first impression, the game is a fairly straightforward port , tasking Mario with climbing the original four stages to rescue Pauline. After clearing the original stages, something unexpected happens: Mario chases Donkey Kong up and out of the construction site and into a Super Mario Bros. 3-style map. There are 96 new stages past the “remake” of the first four; 100 stages in all. There’s a variety of worlds thrown your way, from a forest, a pirate ship, an airplane, and even an iceberg to name a few.

The variety of levels is impressive, especially for a game of its size.

DK94 throws new mechanics at you quickly, but not overwhelmingly. You can climb and hang along tightropes to cross gaps or build momentum, enemies and items can be picked up and thrown if you jump on top of them. There is a backwards jump a la Super Mario 64 to gain extra height. You can even make Mario do a handstand, walking on his hands and letting some projectiles bounce off his feet. Each world introduces new items and mechanics as you go, such as ally creatures that help you reach higher jumps, climbable ropes, and balance beams to twirl on. Mario arguably has more movement options in this game than most of his 3D outings, let alone any of the other 2D titles. It’s a blast to use these skills to rush through each level, grabbing the purse, hat, and parasol Pauline left behind in each level to rack up a high score.

There’s a lot of charm in DK94’s graphics and sound, evident from even just moving Mario around. Have him fall from a high enough spot and he splats on the ground, leg twitching in the air. When performing acrobatic feats, he strikes gymnastic poses, something that became a staple of the 3D entries. There’s some really incredible sprite work at play here, and it helps the flow of the game with how easy the levels are to read. Cutscenes between levels introduce the new mechanics, so you’re never thrust into a level with no idea what to do. As you progress, you’ll even see DK bring Jr. into the mix, having the younger ape throw poison mushrooms to fell the plumber. This would be Jr.’s last major appearance aside from hitting the court in Mario Tennis and getting added as a racer in Mario Kart Tour, so it’s nice to see him helping his pop. 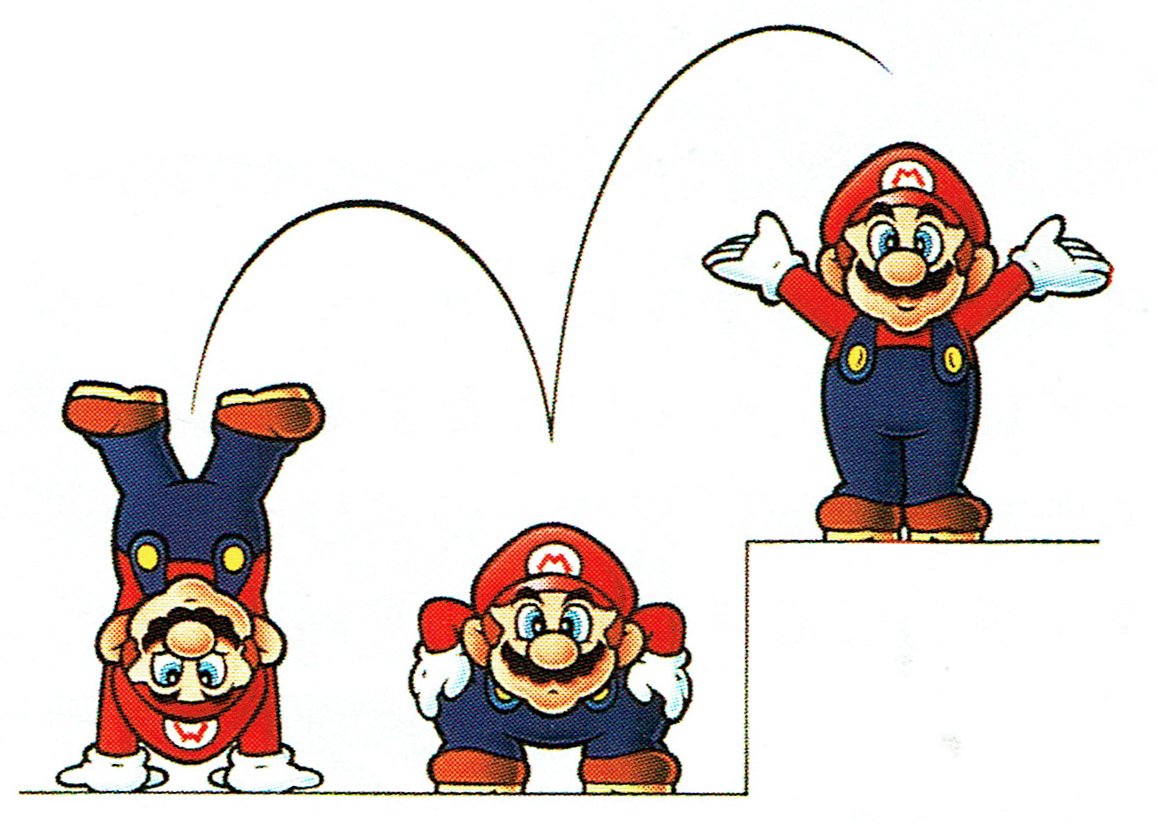 Mario’s acrobatics are fun to watch, as seen in this official art for the game.

In the sound department, while the music works, it’s the voices and sound effects that are more memorable. Pauline’s pixelated cries for assistance, the bounce of Mario’s jumps, and the slams of barrels falling down are captured well on the Game Boy, but I wish there was a bit more to the soundtrack. It’s not bad, but there’s not really anything here that’ll make you tap your foot or look up online for later listening. I suppose it shares that with the arcade game, as there’s more music overall, so it’s got that going for it over the original.

There’s an ingenuity at play here that you don’t see much from Nintendo’s safer titles starring Mario. Off-beat games like this are often regulated to the Warios and Captain Toads of Nintendo’s roster, So it’s surprising to see many “Best of Mario” lists skip right over DK94, when it’s easily in my top ten, maybe even top five, 2D Mario games. Handheld titles can be overlooked, Mario Land notwithstanding,  but this one’s still not in the conversation! It’s a shame, but it’s easy to guess why.

First, its title is pretty bad. Just “Donkey Kong” makes the average gamer think this is yet another port of the arcade game, and by 1994 people were looking for bigger and better games than a four screen platformer. This goes hand-in-hand with the twist at the start of the game. After the first four screens, the game opens up, but turning the game on for the first time and just seeing the original 25m stage, an uninformed player might look at the title and the game and figure it’s just the same old game and move on.

There’s also the issue of timing. The Super Nintendo had been out for about a year by the time DK94 had been released. The Game Boy was a bit long in the tooth, and there was both a more popular “Mario” game available on Game Boy with Wario Land ( technically Super Mario Land 3!) *and* a more popular Donkey Kong game on SNES coming later that year in the revolutionary Donkey Kong Country. Gamers wanted to look to the future, and something that could easily be mistaken as an old arcade game wasn’t on the forefront of most people’s minds. 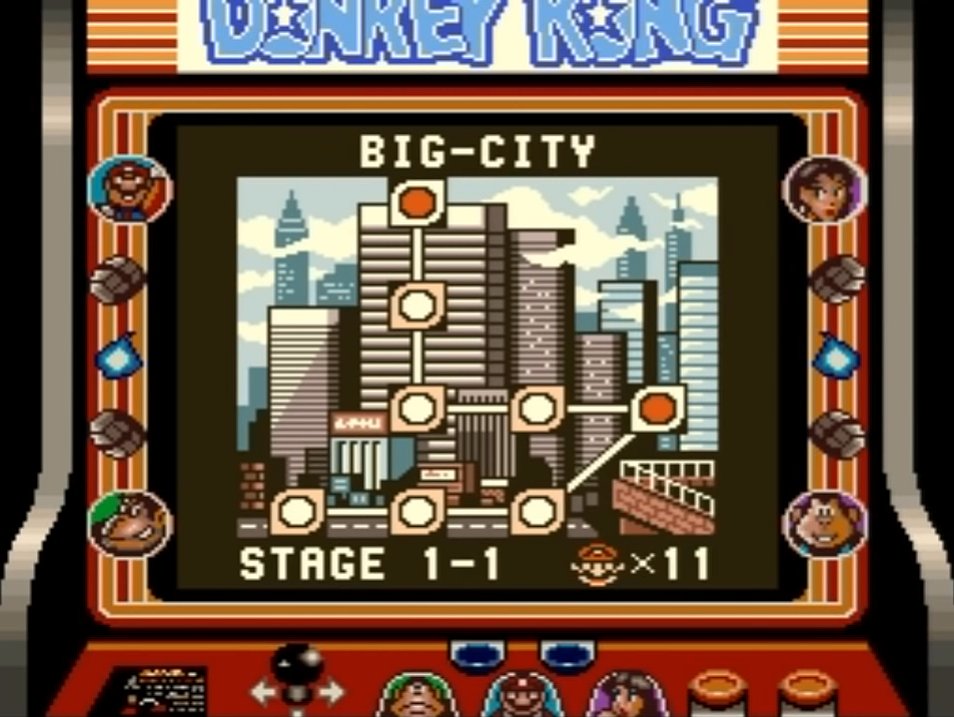 I’m guessing a lot of people missed this screen.

Donkey Kong ‘94 is worth going back to. Its mechanics are surprisingly modern, it’s quite beefy in scope, and it’s just a blast to play. It’s best experienced in color, with several Super Game Boy options built into the cartridge. If you are a fan of this game and want more, there is a sequel! Mario vs Donkey Kong on the GBA is *actually* a true-blue follow-up to this! The Lemmings-style minis didn’t factor into the gameplay until the second Mario vs. Donkey Kong. It’s a shame that Nintendo hasn’t made another game in this style, as bite-sized puzzle platforming would be great on Switch. It was released on the 3DS Virtual Console, but that’s not exactly an option now, so for now Donkey Kong ‘94 makes for a great reason to continue to rally for Game Boy on Switch so everyone can get a taste of a bona-fide classic of portable platforming.

John Michonski has been writing almost as long as he's been gaming. He loves handhelds, rich stories, and unique experiences only games can give.