Video Game of the Day – May 15th – Final Fantasy Tactics 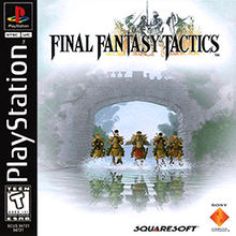 Video Game of the Day is a daily show available on Amazon Alexa devices and here on this website. Each day, we briefly discuss the history of a single game, randomly chosen. If you would like to listen on your daily flash briefing, you can enable Video Game of the Day here: https://amzn.to/2CNx2NJ.

Hello and welcome! My name is Katosepe and I’ll be your host for today’s Video Game of the Day.

The Final Fantasy series is no stranger to spin-offs. The Mana series and SaGa series both have their roots in Final Fantasy. The Mystery Dungeon series has had three Final Fantasy spin-off titles focused on the adorable yellow Chocobos. More recently, the Bravely Default games are spun off of The 4 Heroes of Light. Still, of all the spin-offs Final Fantasy has seen, past and present, few could top the cultural impression left by today’s game. Today’s game is Final Fantasy Tactics, developed by SquareSoft and released on the Playstation in 1997.

Final Fantasy Tactics puts players in a deeply political story inside a fantasy world called Ivalice. You play primarily as Ramza, a noble who’s best friend Delita is a commoner. Despite being raised and taught to treat all people equally, both Ramza and Delita wind up conflicting heavily in their beliefs of how people ought to be. The story is complex and thrives in political and social grey areas.

Final Fantasy Tactics is named after and perhaps best remembered for its battle system. While it is far from the first tactics RPG, it did cement many of the tropes that we often think of in tactics games today. Battles are held on isometric maps and often contain 10 or more soldiers on each side. It is your job to move your soldiers tactically around the map to defeat enemies without losing any of your own. If one of your soldiers reaches 0 HP, you will have three turns to revive them or they will be lost forever.

Final Fantasy Tactics was most inspired by Final Fantasys 3 and 5, taking the job system and truly running with it. The game has 29 different jobs that can be unlocked, often by leveling up soldiers in earlier jobs to master special, advanced jobs. Each job has their own specialties and unique moves, such as the Archer which specializes in ranged attacks or the Time Mage which can use time magic to alter the flow of combat. When not in combat, players move over a world map from location to location. There is no open exploration or walking around like you would in a main series Final Fantasy title but this does allow you to get from location to location much more quickly.

Final Fantasy Tactics was praised upon release and has become even more of a classic over time. Critics often agreed that the game was great but had a few flaws however they often differed on where they thought those flaws lay. Some critics felt the gameplay became repetitive and overly difficult but praised the story. Others felt the gameplay was perfect but the story was hard to follow. Most agreed that the localization was poor and needed a drastic overhaul. Regardless, the game sold very well and cemented the Final Fantasy job system for westerners.

To enable Video Game of the Day on Amazon Echo devices: https://amzn.to/2CNx2NJ

Devin "Katosepe" Sloane is a long time gamer and host of the show Video Game of the Day. He firmly believes Darklands is the pinnacle of gaming achievement and this is a hill he will die upon. Where his nickname came from is a secret to everybody.