Chez Maxime – HOT NEWS : As a Tapper like game from the Philips Videopac(Odyssey 2) arrives on the ZX Spectrum as a full remaster

Not satisfied with the amount of games posted and think more are needed! Then how about this game then it’s ‘Chez Maxime’. A brand new ZX Spectrum remaster from Highrise and Gabriele Amore, as a game that was regarded by many including ARG as a hidden gem from 1983 for the Phillips Videopac (Odyssey 2). For those of you that haven’t heard of this game before, it was noted via the reddit discussion page that it’s a lot like Tapper but set in a French restaurant with many hours worth of enjoyment, and even more so on the ZX Spectrum.

Chez Maxime is a French game published in 1983 for the Phillips Videopac, also known as the Magnavox Odyssey 2, a console first released in 1978. The game was ‘rediscovered’ by the ARG presents Youtube channel as a hidden gem, and this is the first time this obscure but delightful little game is playable on any other system for a wider audience to enjoy. The coder, Highrise, who is well known on the Spectrum scene for converting a number of games to the system in the past such as Asteroids, Joust, Terrapins and InvAGDers Deluxe, had this to say: 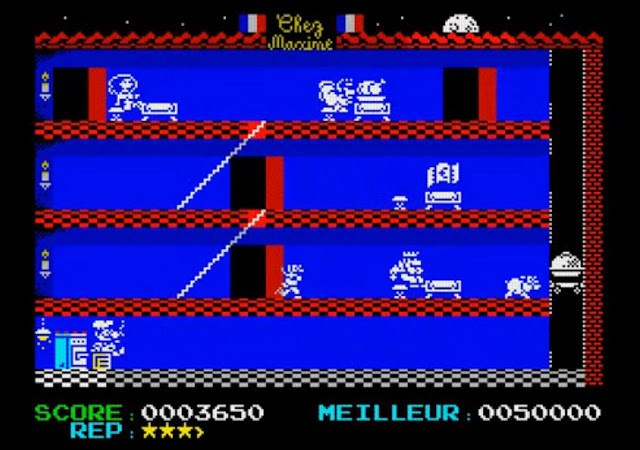 “This time I’ve gone for a full ‘retro-remaster’ – taking the original, keeping the core gameplay but taking advantage of the higher resolution to give the graphics a more cartoon style (courtesy of Gabriele Amore), and adding extra elements wherever possible with the ‘newer’ 1982 hardware.The core gameplay remains intact, and the end result is a fun arcade style romp with bags of personality and elements of mid-80s arcade classics such as Tapper and Mikie.”